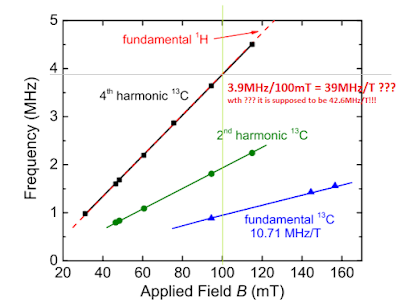 This is clear evidence that the theoretical peak Larmor frequency of 1H is much lower than the mainstream theory, likely -4.5% lower.

Needs more statistical evidence to overturn a hundred year old theory.  These things must be accurately predicted by a good theory, and our theory and way of working with the proton appears to match the empirical data.  To be continued...

Where do you go to update https://www.nobelprize.org/nobel_prizes/physics/laureates/1943/ ?

"The Nobel Prize in Physics 1943 was awarded to Otto Stern "for his contribution to the development of the molecular ray method and his discovery of the magnetic moment of the proton"."