The above image/link is of an Excel file showing that for n=4 case, the quantized angular momentum equation predicts the proton mass and disputed (muonic hydrogen) proton charge radius ($r_p=0.8412fm$).

The quantized angular momentum is calculated as shown on the previous post by using the de Broglie hypothesis, which amounts to assuming photonic (boson) energy with no rest mass, thus the equation for momentum applies:
$$p=m\nu={h\over\lambda}$$
and after solving for angular momentum, one gets
$$mr={nh\over2\pi c}$$
and for the $n=4$ case, the proton mass-radius product:


$$m_pr_p={2h\over\pi c}=4\ell m_{\ell}$$
All of the mass-energy of the proton is contained within a stable vortex in the aether of spherical radius, $r_p$. This is possible when one begins to examine the problem more completely as we have done previously, and that is to consider the vacuum energy density as Haramein has, and realize the proton is a stable oscillation in the Planckian aether, which is such high density, it behaves like a black hole and the photonic energy creates a path in 3D space where the aether flows or energetically vibrates.

Since the energy density of the vacuum is so high, the conditions for wormhole connected space are met, then the proton could be envisioned as an energetic vibration in the aether, and it is likely a stable vortex flow.  There is much more implied by this view which will be examined in future posts.

The picture of the proton is then some 3D oscillation in the aether, thus perhaps the problem could be approached from aether dynamics and shown, in the limit, that the detailed solution approaches this post's approach, which is a lumped mass-radius idea coming from reductionist 1D-2D Cartesian physics approach rather than a whole 3D approach that includes interaction with the vacuum, i.e., resolution to the vacuum catastrophe.

Considering that this calculation results in the proton radius being 0.8412fm, and this is VERY close to the 2010 & 2013 muonic hydrogen proton radius experiments, I wonder why this hasn't been written about in the science journals or sites since it is simply the first thing one would look at if examining quantized angular momentum.

Here's a diagram showing a hypothesized infinitesimal point mass at a radius r moving circularly at the speed of light.  This is a diagram for the derivation - a real proton is more like described above and this diagram is a convenient way to represent some of the information about the proton that agrees with measurements. 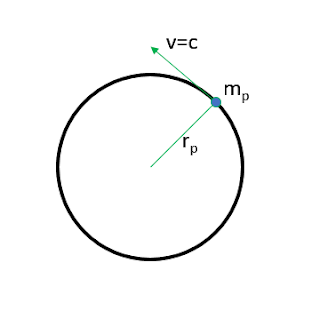 Infinitesimal point mass, $m_p$, representing the proton mass, circular motion at the speed of light, at the radius of the proton, $r_p$ distance from center.  While this was simply a tool to derive the equation, the actual energy in the proton is the gamma/cosmic ray photon energy that is required to  create a stable vortex in the aether.  Still, this physical picture really gives one a sense of a very clearly defined boundary at the proton radius, $r_p$.

The energy itself is involved in a black whole like disturbance in the Planckian aether.  I suspect the proper fluid dynamics or plasma dynamics (fluid-plasma dynamics? - high energy reactions seem to be showing evidence of a fluid dynamic rather than a gas dynamic) would result in solutions that would explain or somehow contain information in the derivation as to WHY the proton mass-radius is distributed according to quantized circular angular momentum for the n=4 case.  Similarly using same possible future technique, one should be able to calculate the masses of all fundamental particles of the standard model. 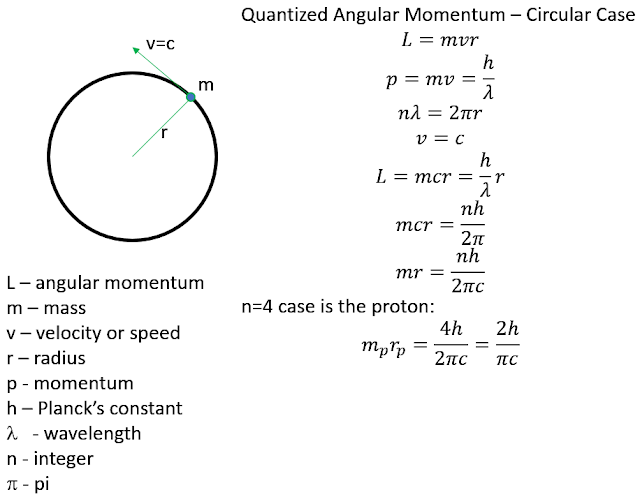 Ω
Posted by PhxMarkER at 9:17 PM No comments:

A quick check can be made by examining the two wikipedia pages linked here:
wikilink for mass
wikilink for length

Since the mass-length product is a key part of the equation for the proton mass-radius relationship, it may be informative to examine more deeply this product.

By inspection, one can see that this equation is a form or a specific case of quantized angular momentum, such as that proposed in the Bohr model.

However, it could also be a solution to a stable vibration in the ether, like a black hole / white hole dual vortex pair.

Now, for investigative purposes, let's look at the math of treating the proton mass as a point mass at the end of a radius[1], going at the speed of light, c, and look at the angular momentum:

Using the hypothesis that the proton is condensed light, a stable EM? vibration in the ether, thus $$\nu=c$$
$$L=m\nu r=mcr={hr\over\lambda}$$
$$mr={hr\over c\lambda}$$
Using the Bohr circular waveguide around a central point (integer number of wavelengths in a circumference), $$\lambda={2\pi r\over n}$$
$$mr={nh\over2\pi c}$$
For the $n=4$ case, why $n=4$ ? Tetrahedron is first 3D vibration???  Nonetheless, let $n=4$ because looking ahead, it is $n=4$ that is the stable proton "solution" to this energetic disturbance in the vacuum dynamics we call  proton. 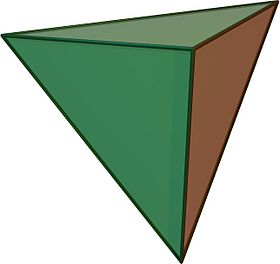 $$mr={2h\over\pi c}=4\ell m_{\ell}$$
Which is the proton mass-radius relationship.  Note we are not saying that the proton is a little positively charge ball spinning at a radius r around a central point - this is just a way to keep track of part of the information of the proton, i.e., quantifying an aspect of an energetic disturbance in the aether, the math of which we'll have to look into later.

A star-tetrahedron, if free to rotate around a central point, draws out a sphere 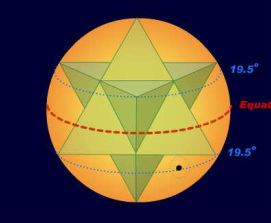 and it is this energetic stably trapped photonic (EM) energy that is the proton: 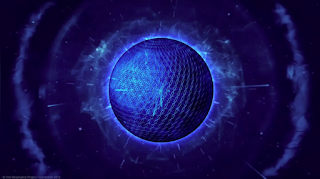 A complete picture would include the surrounding disturbances in the aether, since nothing is isolated, but entangled.

Next, we'll look at how these ideas can be extended to replacing the strong force with quantum gravity, as Haramein did in: Quantum Gravity and the Holographic Mass and check to see if it makes any sense to go in this direction.

[1] This is a way of making an attempt to summarize or model the information of a proton since the 3D/4D (up to 8D???) superfluid or super-plasma dynamics equations are out of the scope of this presentation.

Posted by PhxMarkER at 12:59 PM No comments: